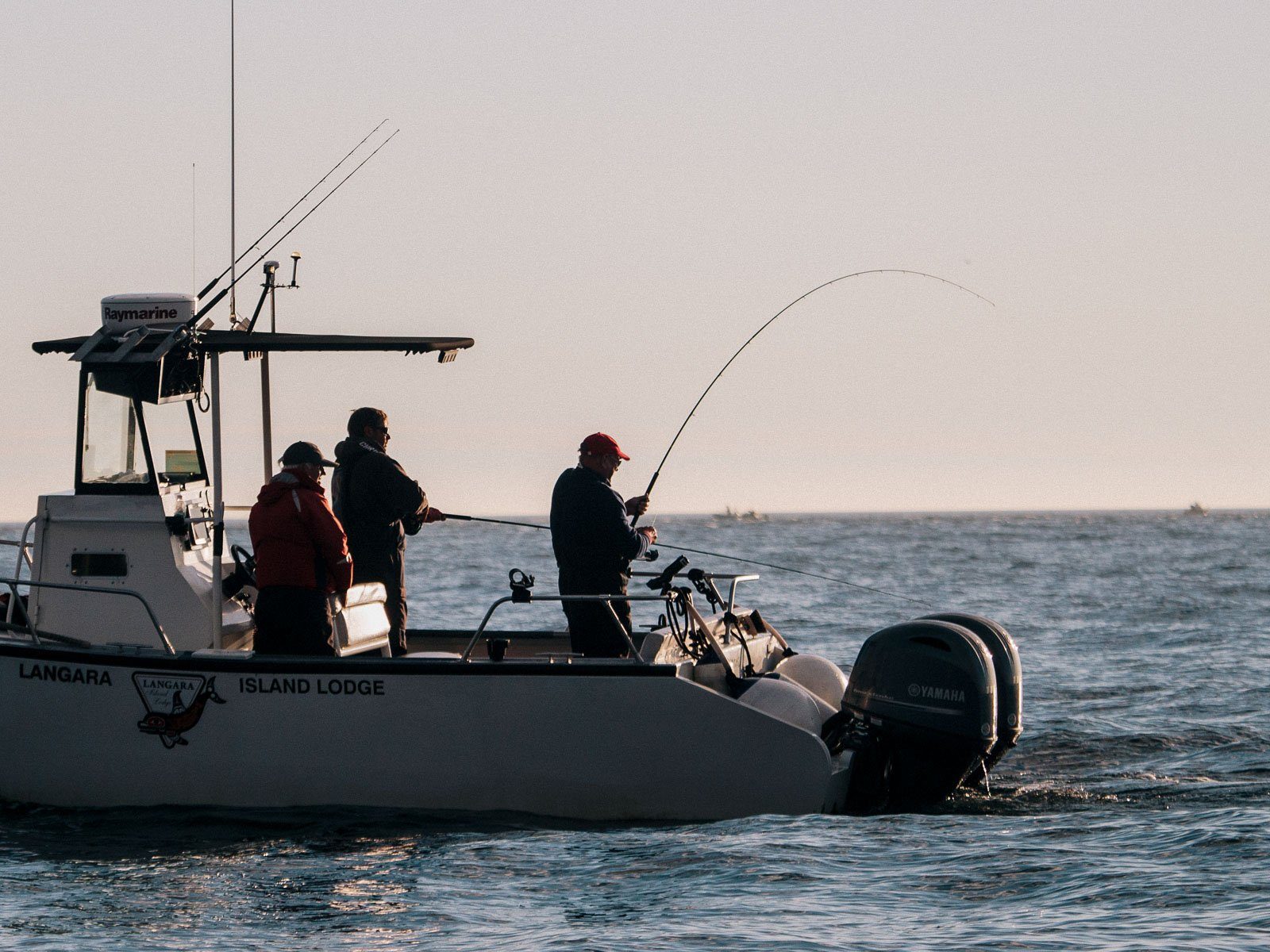 This past week finally brought some favourable conditions that stuck for more than half a day. It’s been mostly sunshine this trip, with NW winds that have varied from light to brisk; forecast is currently calling for more of the same for much of this coming week, with a bit of rain in the mix.

The only damper is when the winds blow consistently NW it limits opportunities for fishing off the west side, but that’s the price you pay for sunshine up here sometimes!

The bait and the salmon have been hanging out from Andrews Point to Cohoe Point, both near and offshore. The larger schools of herring here are attracting Chinook more on the shallow side.

Thursday provided probably our best action of the season so far, with a good bite starting off Andrews at first light. The bait and fish moved towards Cohoe, where it heated up a couple of hours later. 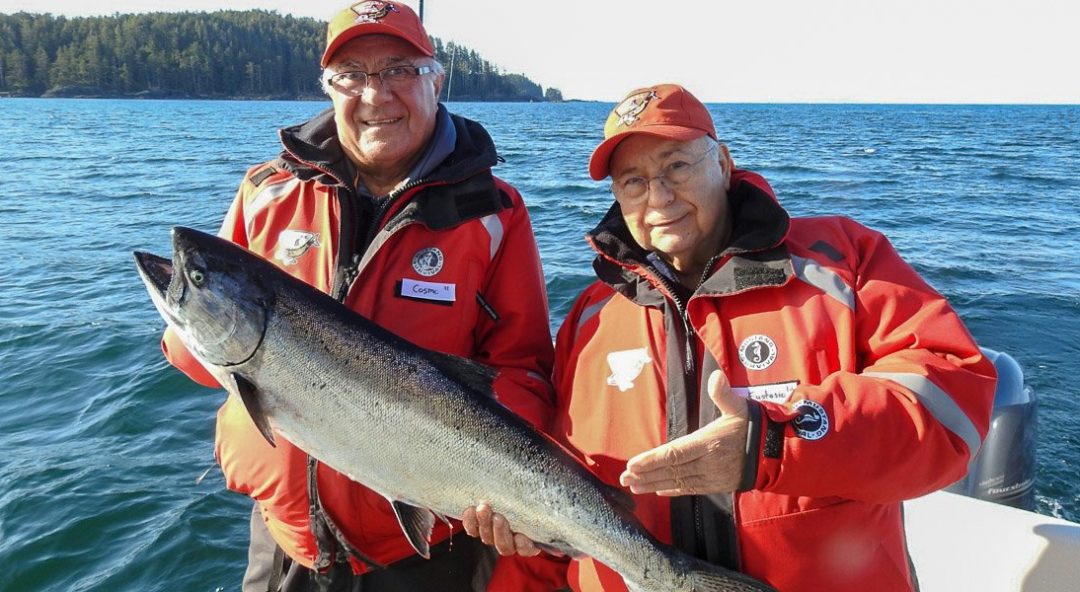 Some salmon were found quite a ways off of Andrews in 250-plus feet of water, but still on the shallow rods. Friday morning was a bit quieter here, as the bait wasn’t as thick.

The locals of Langara. #Haidagwaii

The flood tide drift from Langara Rocks to No Name Point was working earlier this week, but it’s gotten a bit lumpy with the NW winds. It’s always a good bet once the current starts to push through, with the fish biting a bit better near the Rocks so far this year.

The bait out there has been scattered through the water column, so depths from 10 to 100+ feet can be effective (the bottom here varies from 180 to 300 feet) — we tend to fish shallow because it’s easier, but salmon will search for dinner at any depth. 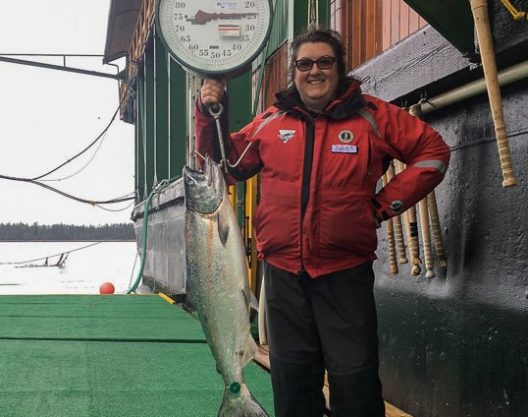 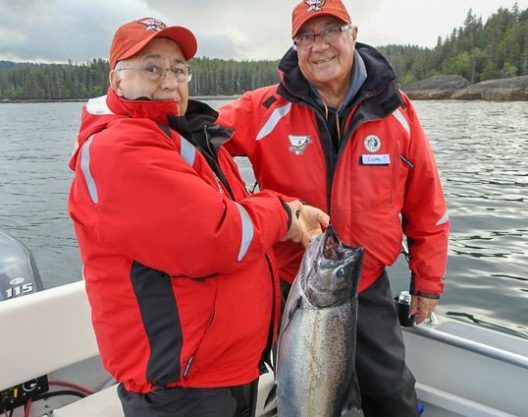 Overall, the east side of Langara has produced more fish this week, but is seeing less angling pressure than the popular spots along Graham Island, particularly around Pillar Bay.

Seath, Boulder, and Gunia Points have all been slightly less productive, but the salmon they are holding are definitely larger in size, with more in the low to mid 20-pound range. 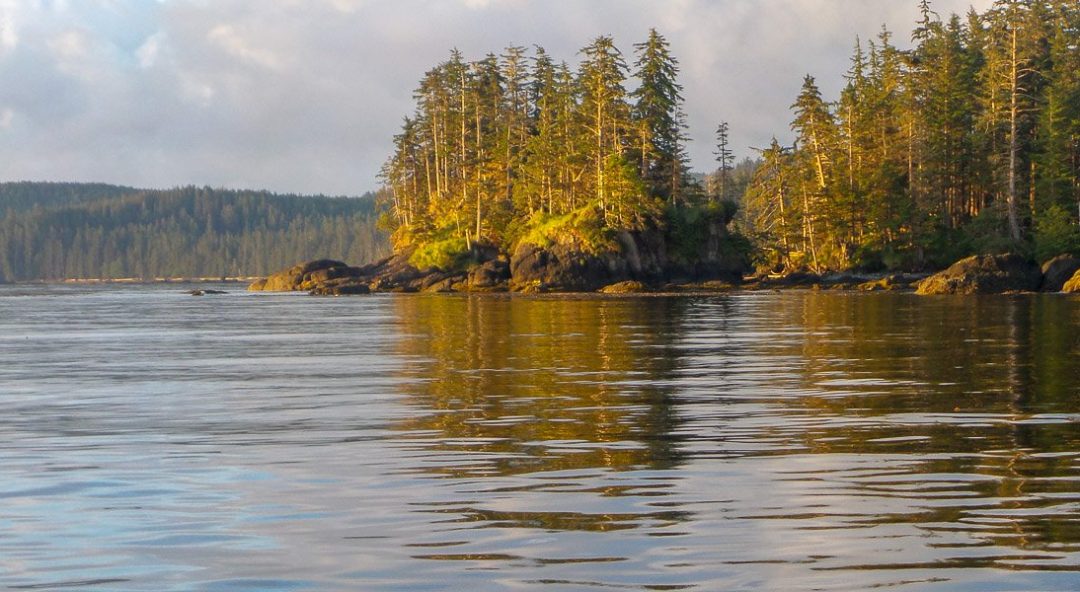 A boat fishing off Boulder Point early Friday enjoyed a great first-light doubleheader, landing a 23-pounder and releasing a 28. Some scattered schools of needlefish seem to be hanging in this area.

Not much activity happening along the rest of Graham Island, from Bruin Bay out to Cape Knox, partly due to the NW winds sneaking into the channel there. 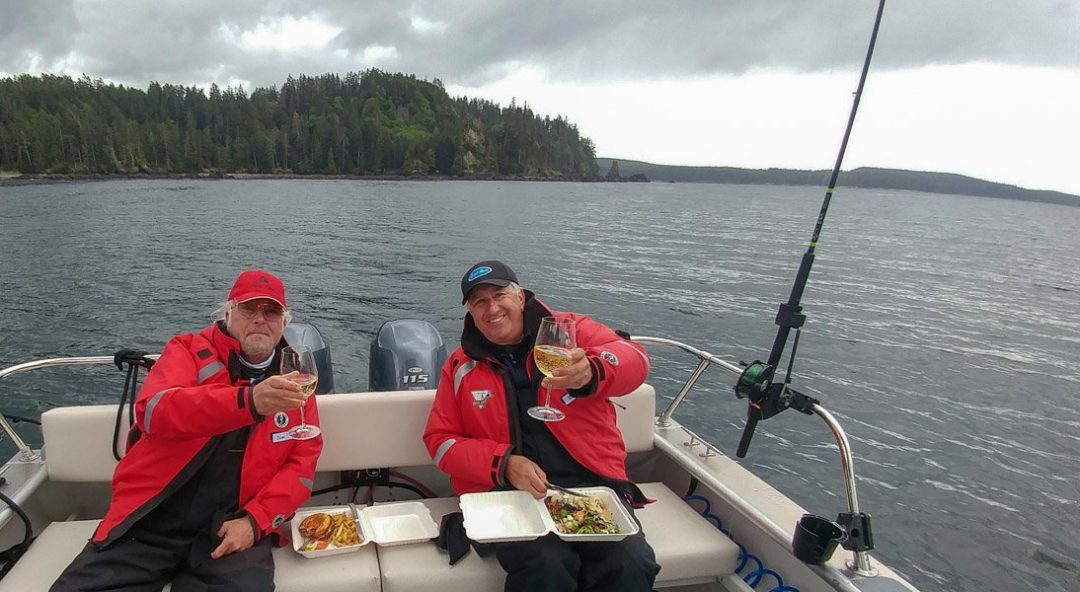 A handful of Coho have been found this trip, along with a few Pinks. We should be seeing both species showing up more frequently as we get into late June and July.

Just wrapping up an amazing week @langarafishing Lodge! Huge thanks to Matt our guide and the entire staff for treating our group of rugby hooligans like gold! A few pics from the trip. I missed @janecarrigangailus terribly, but admit I did kiss a cod. Just some of the pics from our adventure in this absolutely beautiful part of the world! @globalbc_community

Bottom fishing has been a bit quiet this trip with the limited access to the west side, but the usual spots off the east side seem to be producing a never-ending supply of chicken-size Halibut, and the odd Pacific Cod. 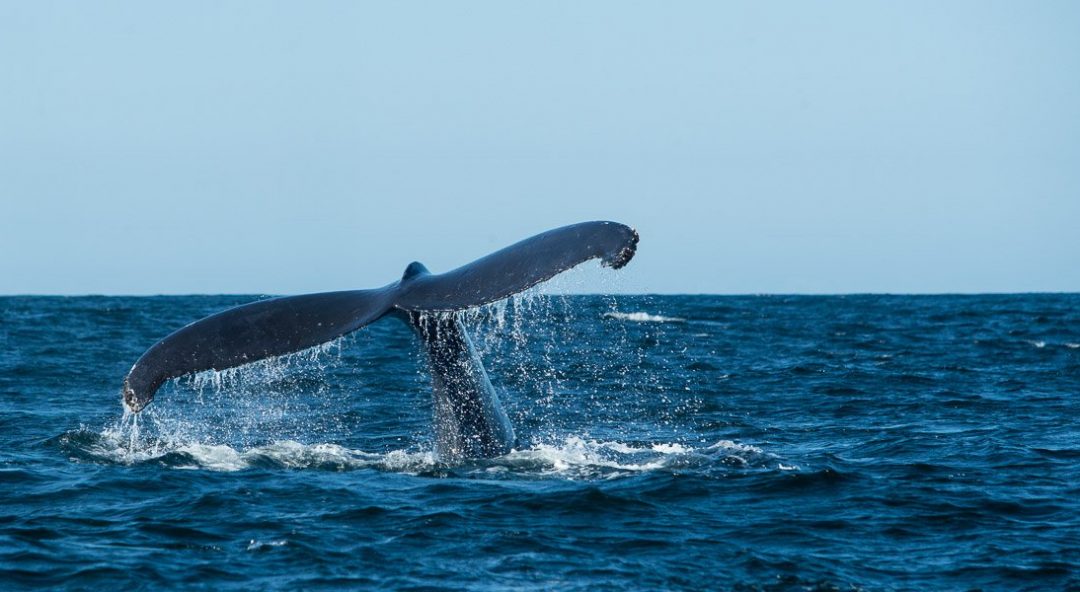 Humpback whales can be seen around the island in varying numbers; they’ve been moving around from nearshore to offshore quite a bit this season. Killer whales have also been a frequent sight, although we haven’t seen much of them this trip. 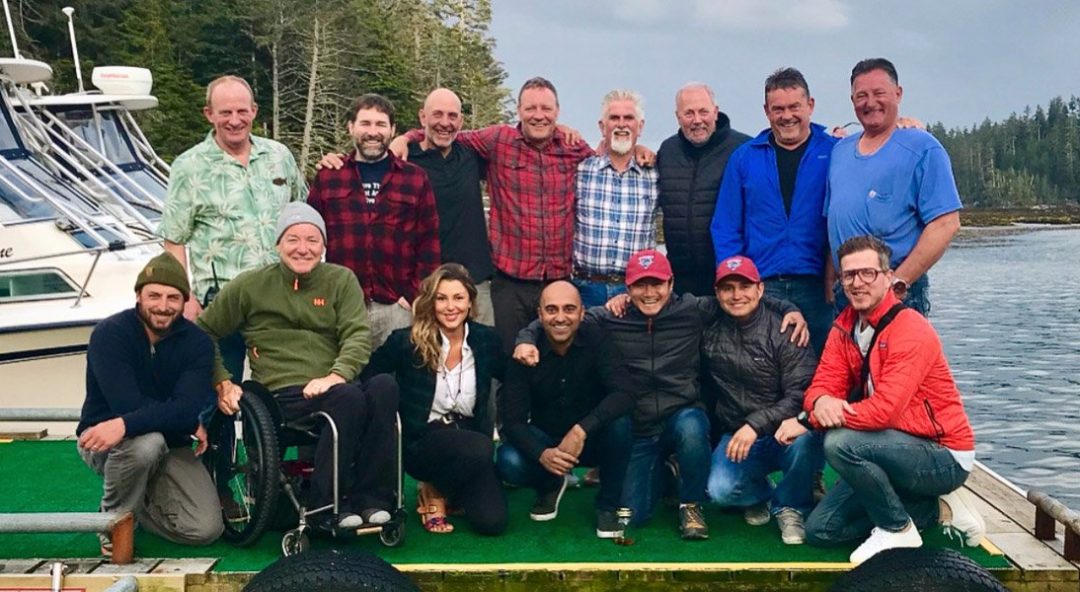 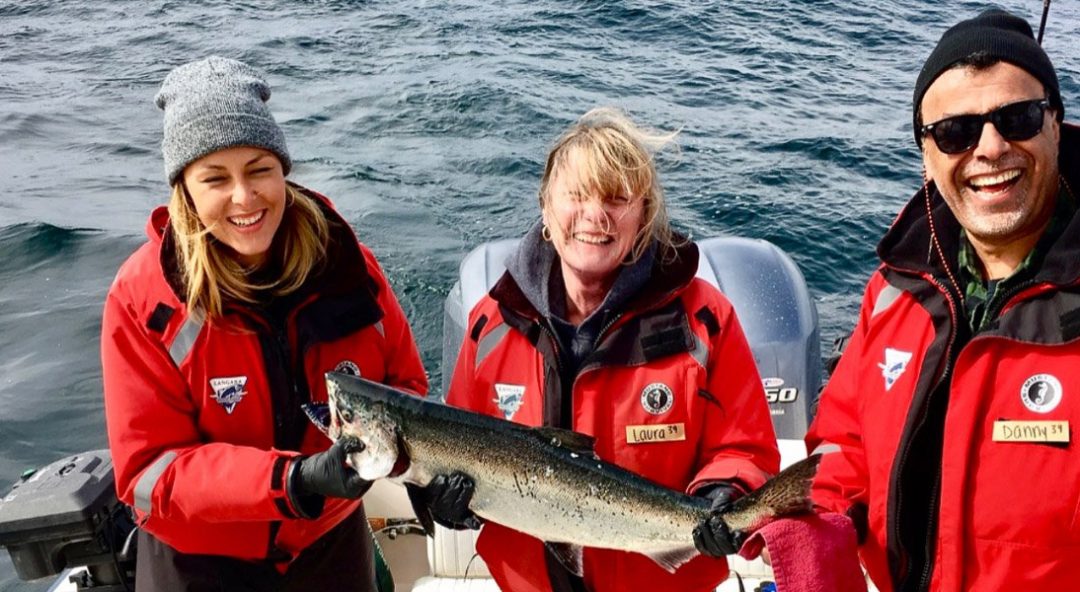 Power To Be Fishing Adventure

Langara Fishing Lodge was pleased to welcome Power To Be this past week, for their first ever salmon fishing adventure.

Power To Be is a nonprofit organization that empowers people living with a barrier or disability to explore their limitless abilities through inclusive adventures rooted in nature.

Thanks to our long partnership with the Rick Hansen Foundation, we’re proud to have made Langara Fishing Lodge accessible for people with mobility issues. 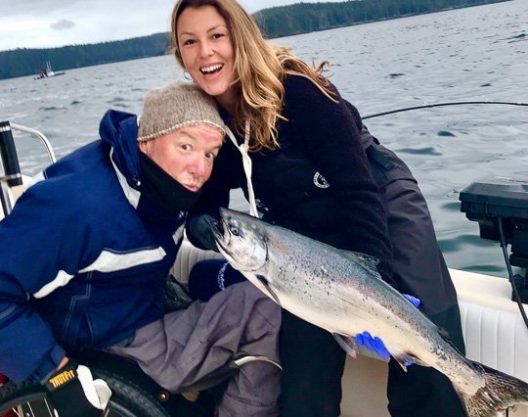 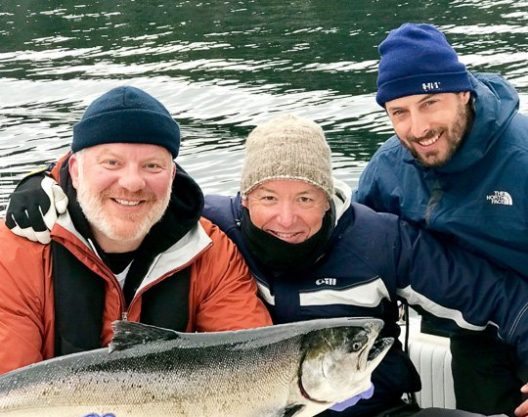