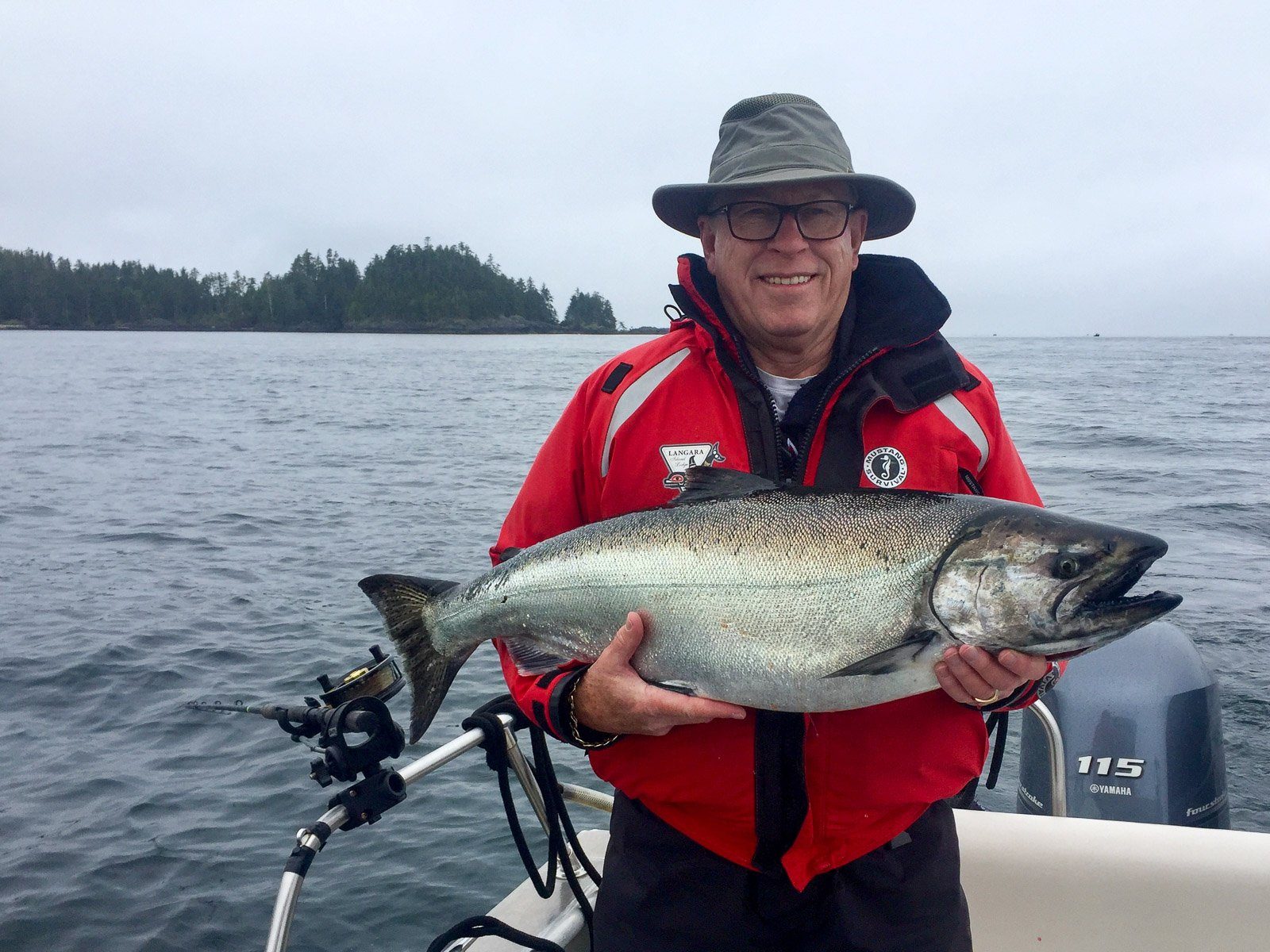 Some sensational sizes of several salmon species showed up this week, including season’s best of Chinook, Chum, and Coho. 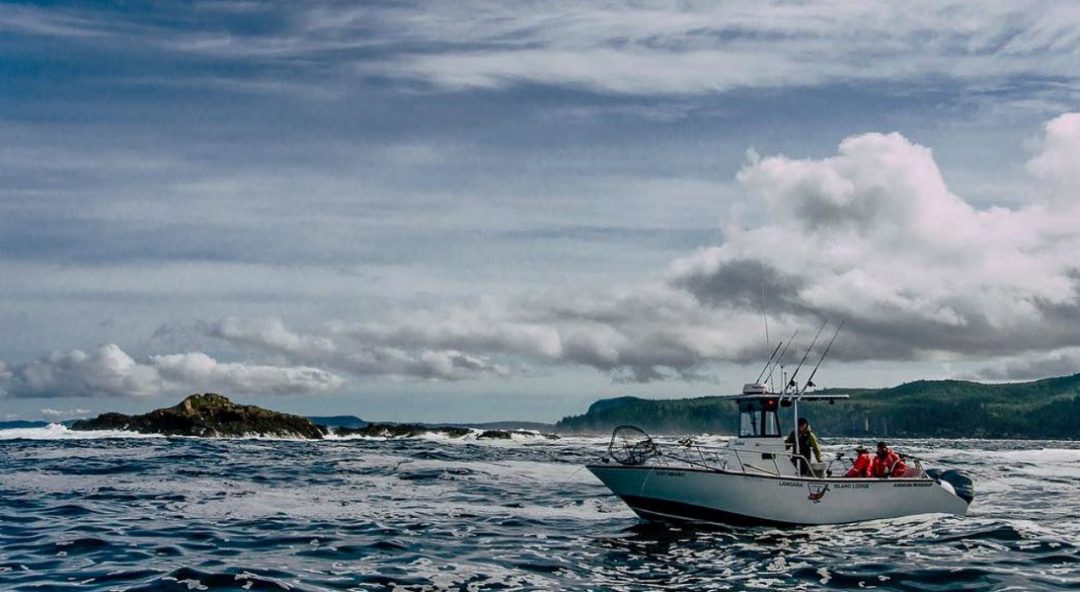 It’s been a solid week up at Langara Island, with productive fishing, lots of whale activity, a fair share of sunshine, and the whole island open for fishing on most days.

Our largest Chinook of the season, measured to 45-pounds, was released off No Name Point on the flood tide Thursday. It was the best of several Tyee-size salmon caught this trip. 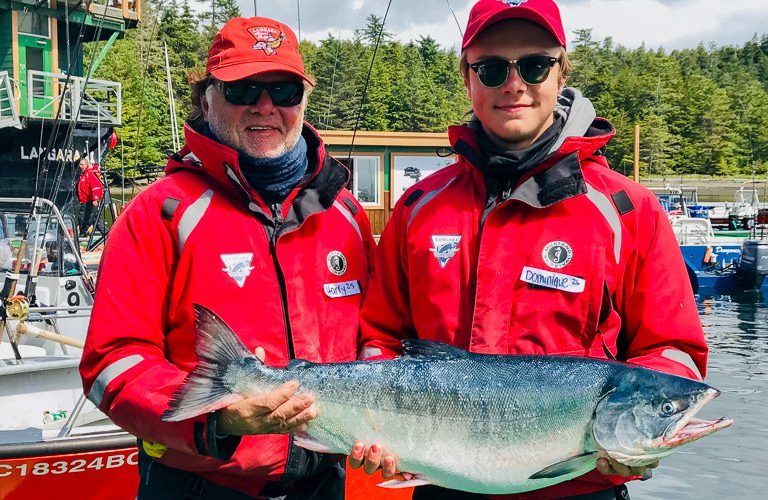 Friday saw a huge 19-pound Chum hit the docks. This is a truly awesome catch — many consider Chum the toughest fighting salmon, pound-for-pound, and it’s a species we rarely encounter over 20-pounds. (Although still a ways off from our lodge record of 24-pounds) 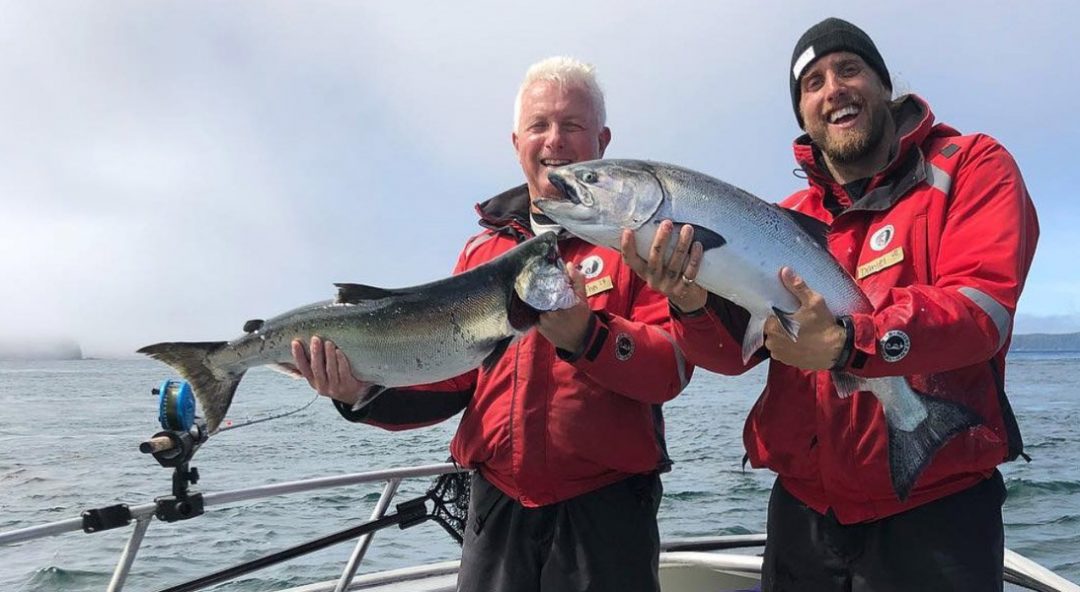 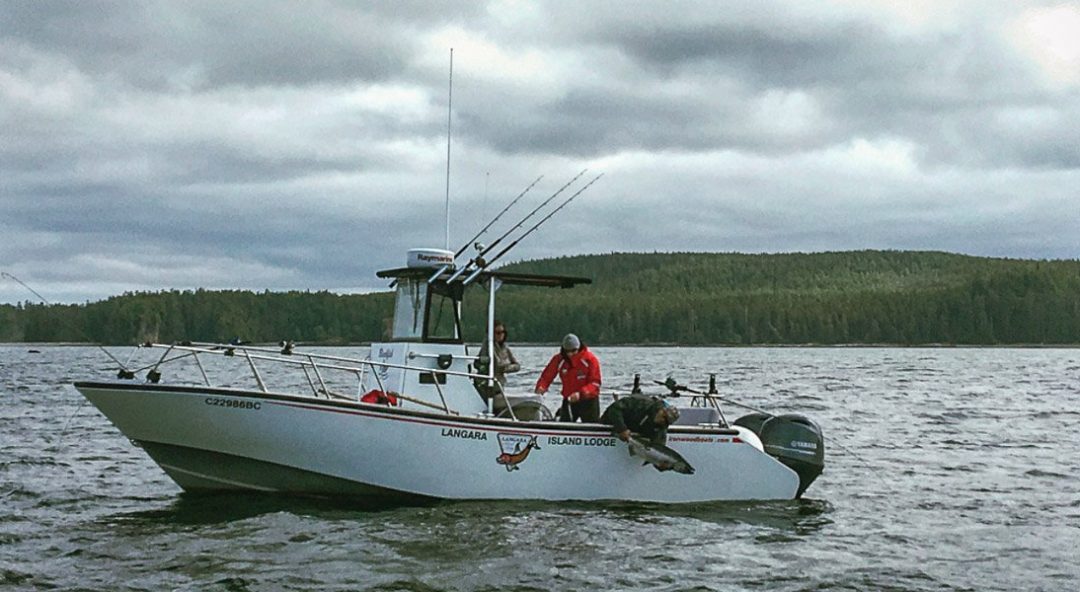 We’re starting to see Coho show up in greater numbers now, and in greater weights. An 11-pounder, and a couple just shy of 10-pounds, were the highlights — all very impressive sizes for this time of the season.

Some guests are taking variety-packs home this weekend, as we’ve also had a few Pinks hit the docks.

The waters around the east side of Langara Island have been producing more consistently for most of this season. Egeria Bay to Andrews Point has been hosted a good morning bite the past few days. 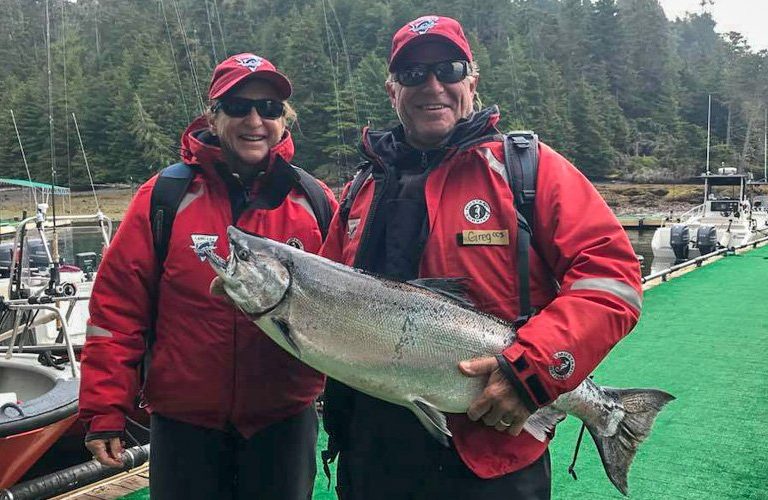 Lots of pockets of bait are hanging out in these waters — most with Chinook feeding around them, and usually at our typical depths of 13-20 pulls. 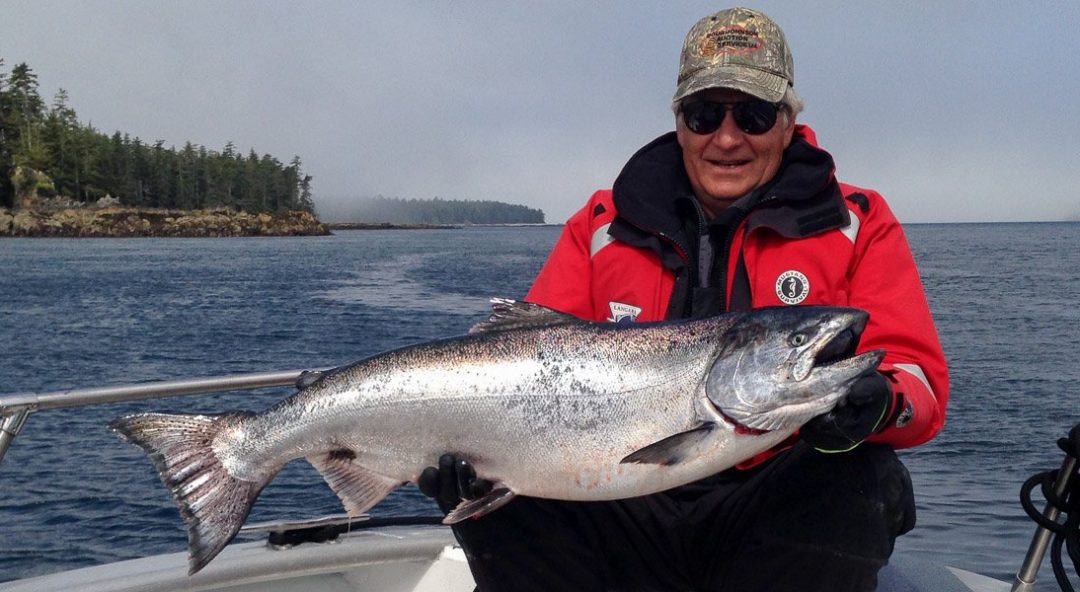 The offshore flood tide drift from Langara Rocks around past McPherson Point is usually a good bet, and has produced several nice Chinook this trip. A few Coho have also been found out there, a bit more from McPherson to Andrews. 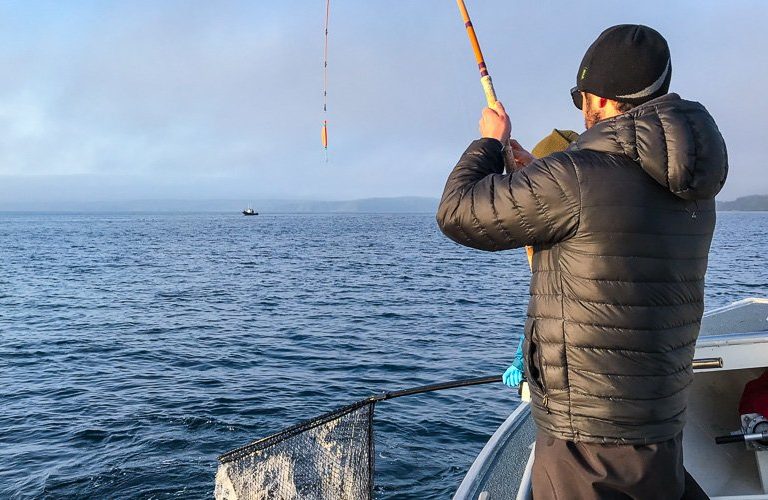 And we just had a nice bite Friday afternoon, offshore of Cohoe Point near Al’s Halibut Hole — a school of bait showed up, with a bunch of Chinook chasing it. 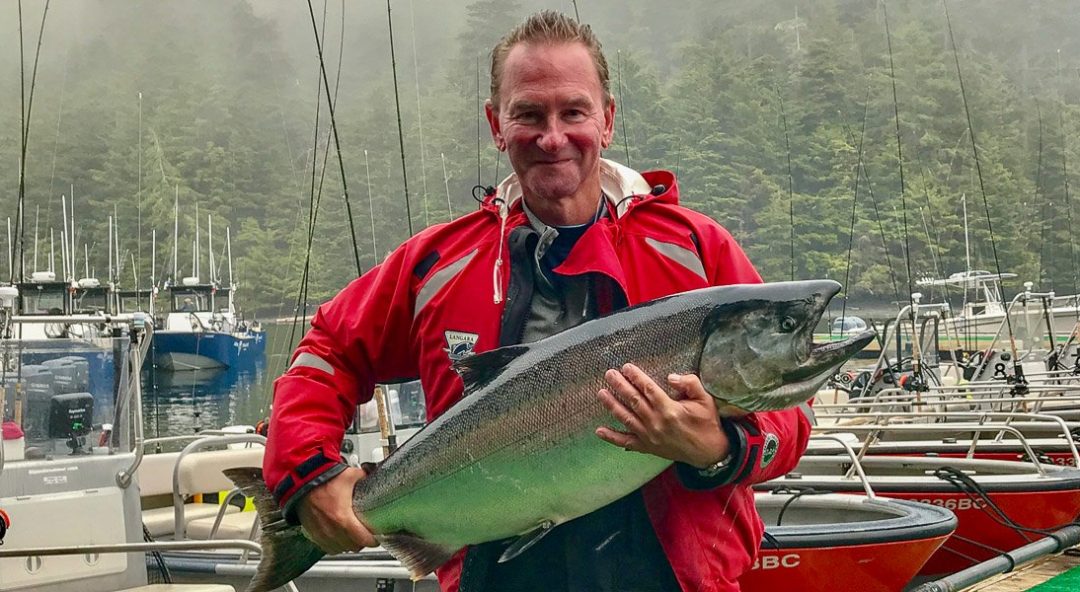 Spots along Graham Island have been more sporadic, but most have kicked out at least a few salmon, so they’re great places to go if you want a quieter stretch of water: Chanal Reef produced a 30+ pound Chinook on the ebb tide; Seath Point and Boulder Point have also had a few; the Jalun has been holding both Chinook and Coho, as has Lepas Bay.

Catching chinook with the old man

Bottom fishing continues to be solid. The entire island has been open for much of this trip, so we’re seeing lots of nice 15-30+ pound Halibut hit the docks from the west side. A few 100+ pounders were hauled up and released, as well. Lingcod have also been easy to find out there.

The whales were around today! Bubble feeding, breaching, tail flapping… brought a bite to some boats…. I took photos (skunked). @langarafishing

Humpback whales have really started to show up in force lately. You can usually see a couple of them lining up for the baitfish buffet in Pillar Bay, and a few seem to be constantly cruising the shorelines from Egeria Bay up to Langara Rocks.

Several Killer whales were spotted buzzing around the island this week, as well.

Overall, just a great week to be out on the water, with Langara Island firing on all cylinders!

Tight lines until next week.

A few wild things that live in the sea up here

Where the forest meets the sea . . . . #dayoff #Grahamisland #lepasbeach #langara