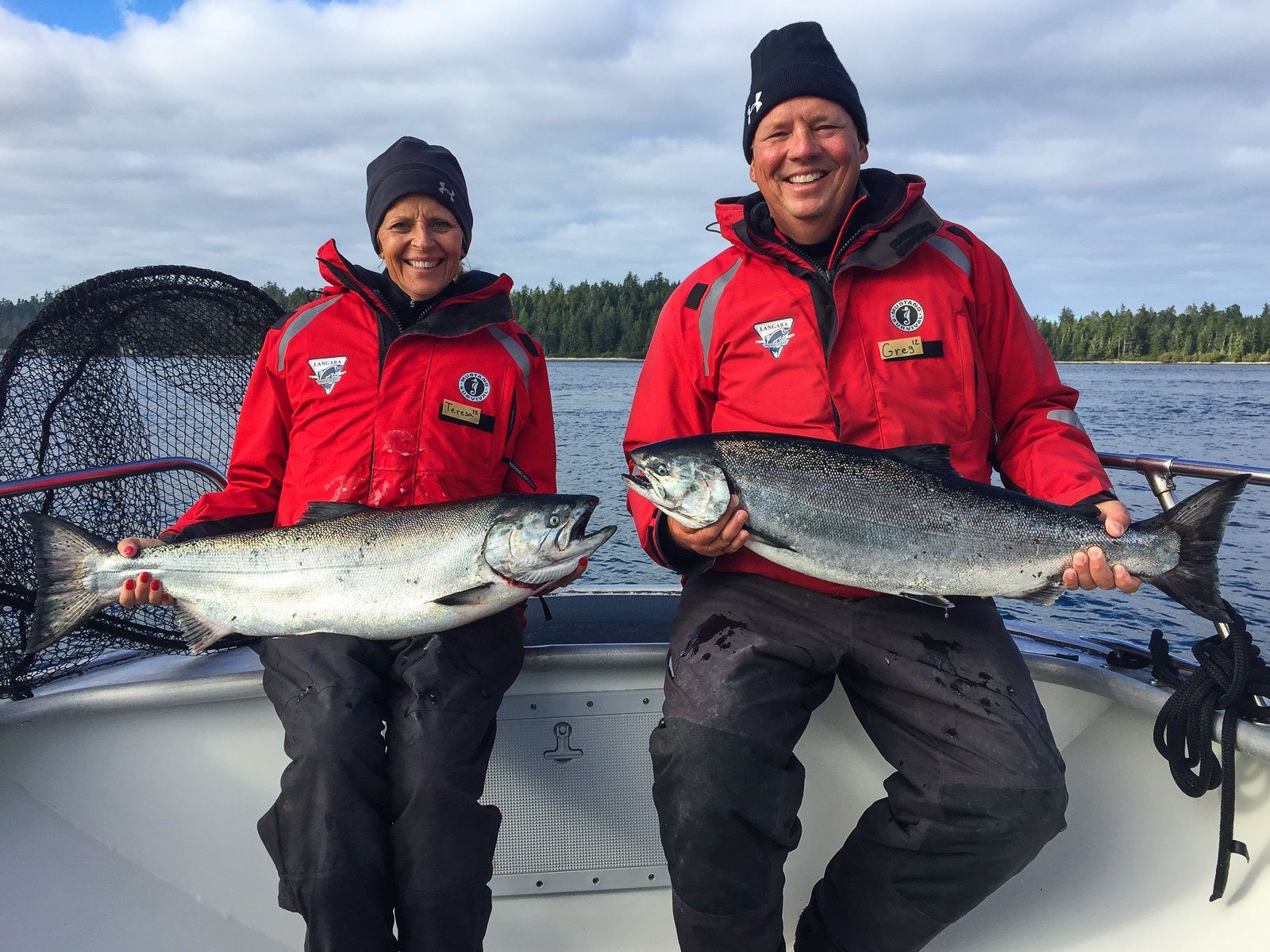 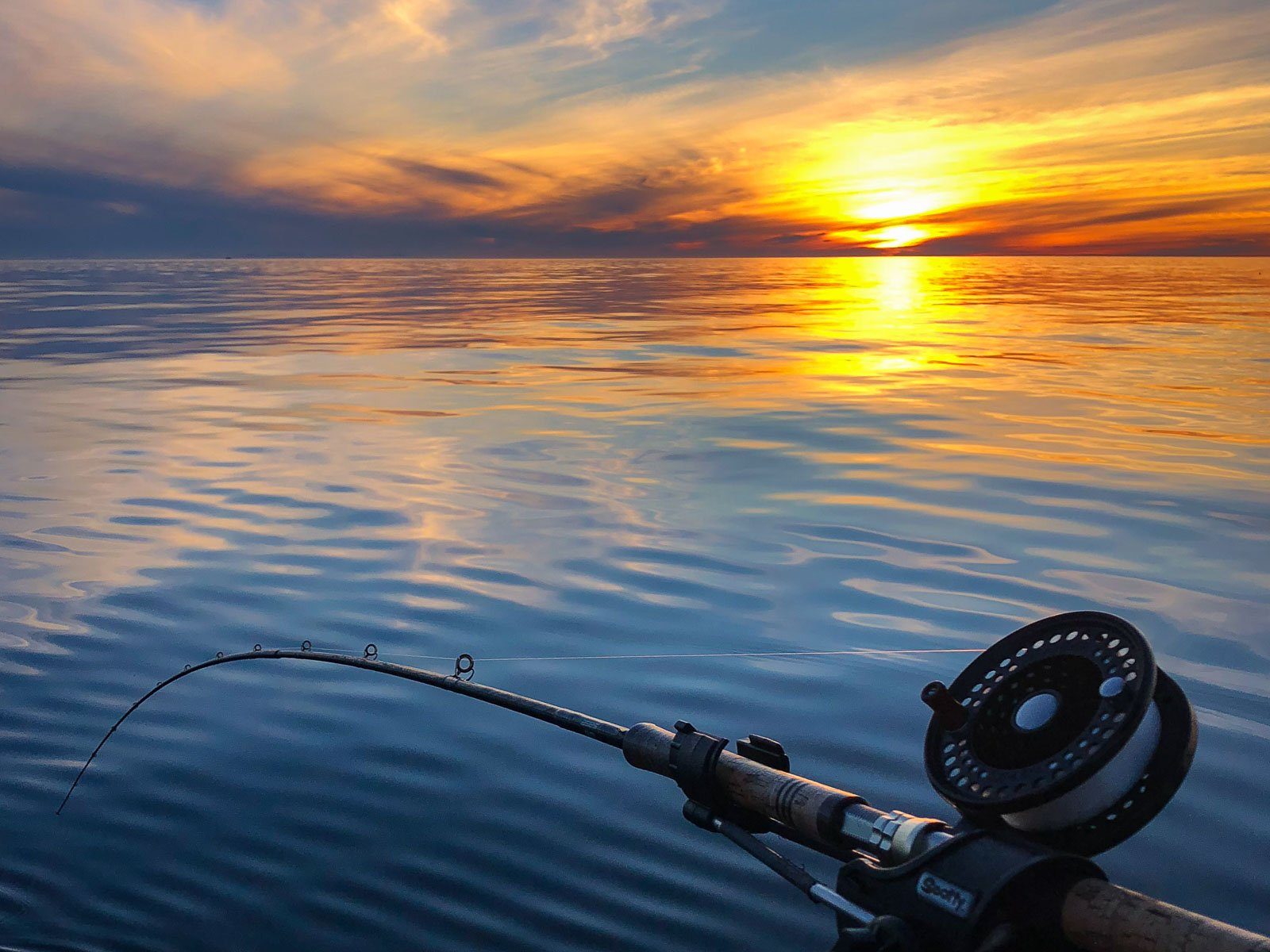 Waiting for a first-light bite 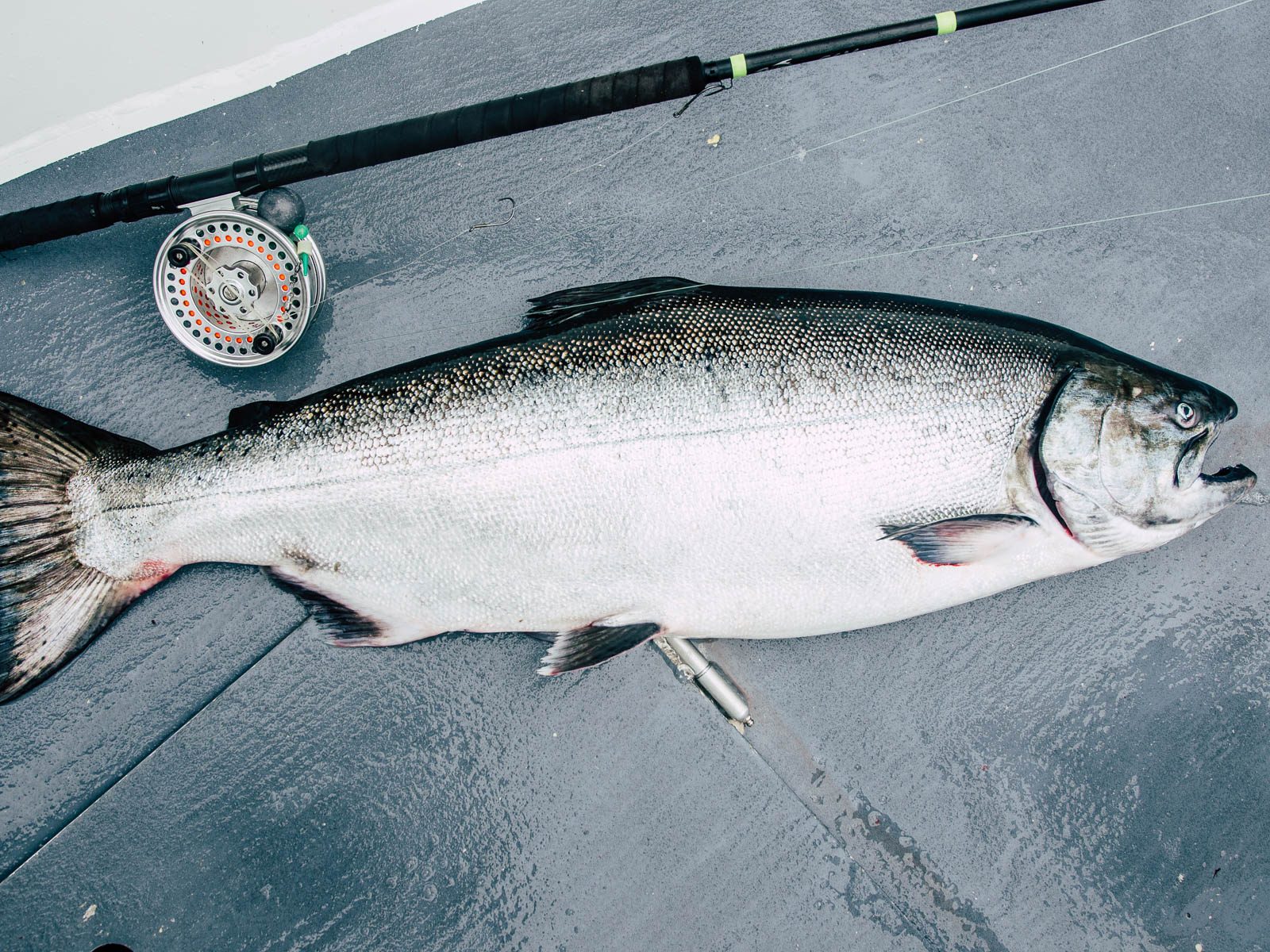 Still some prime Chinook fishing to be enjoyed at Langara 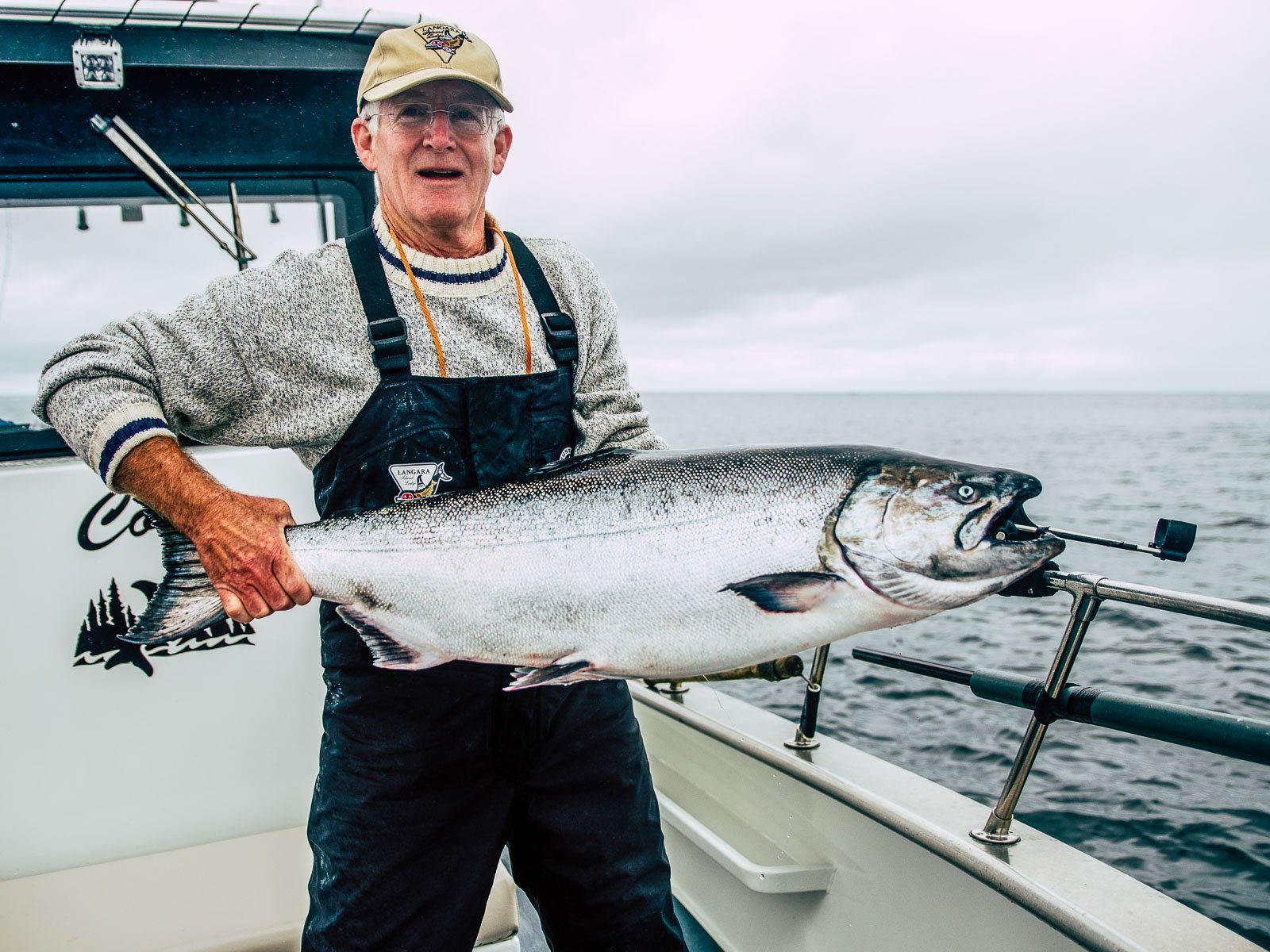 With just a couple weeks left in our 2018 season, Langara Island is still in mid-season form. We’re enjoying productive fishing for both Chinook and Coho — and the Coho are now approaching Chinook-size! 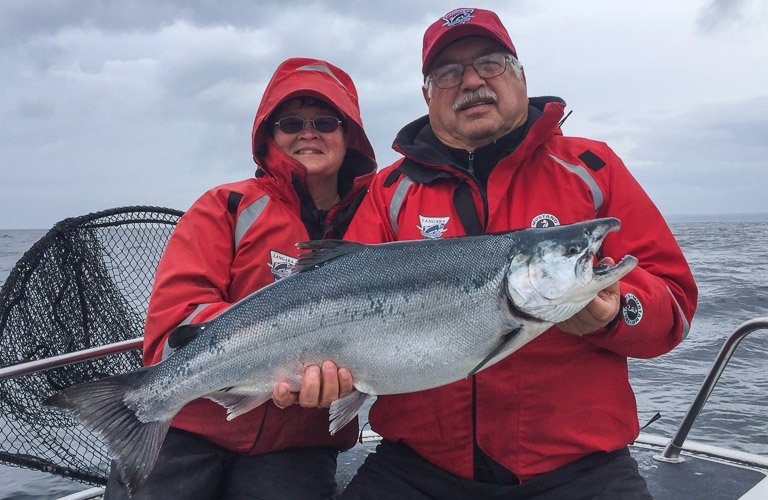 We had already seen several 14-16 pound Coho landed in August prior to this week. These last few days have produced a 16.5- and 17-pounder — and they should only get bigger, as these Northern Coho tend to increase in size as we approach September! 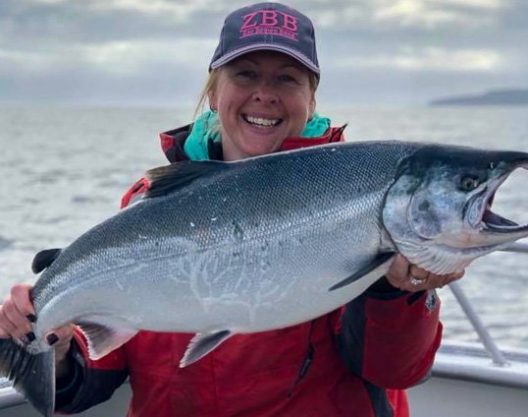 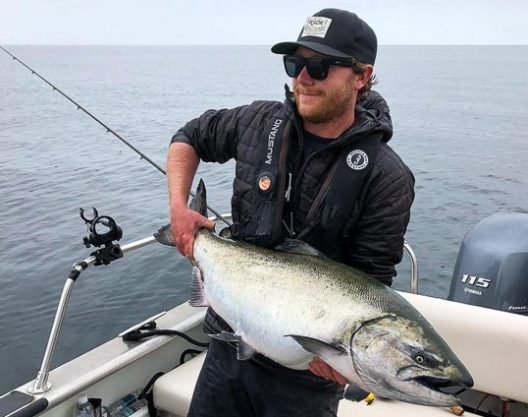 Here we are nearing the end of the season, and we’re currently finding some of our largest salmon of 2018 right now!

That’s been the pattern for these past few years, with September serving up some of our best fishing of the season.

Several guests have also had success targeting these fun fish on a fly rod.

The best area for Coho lately has been offshore of the Jalun River. It’s been solid around the last bit of the flood tide and through the whole ebb tide — drifting from the Jalun back to Seath Point way offshore, out at depths of 200-300 feet of water, with the fish sitting anywhere between 10-50 pulls down.

Some nice Coho have also been found around Langara Rocks on the flood tide drift, with some Chinook mixed in. We’ve seen bites at almost all depths here this week. These waters seems to have a shorter sweet-spot of late. Low slack to the start of the flood has been strong, but once the flood starts it quiets right down.

Anglers are also finding a fair number of Chinook in both of these Coho-heavy areas.

One of our largest of the season was caught and released off Seath Point earlier this week, measuring out to just over 50-pounds — congrats to guest James Bohnert on this great catch! 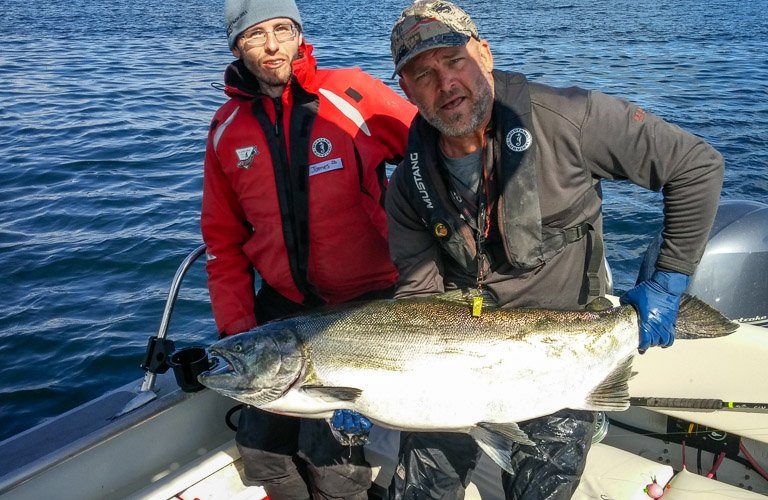 But for those wanting to focus on Chinook, the best bet has definitely been Andrews Point lately. The highlight of most mornings this week has been a flurry of action here. 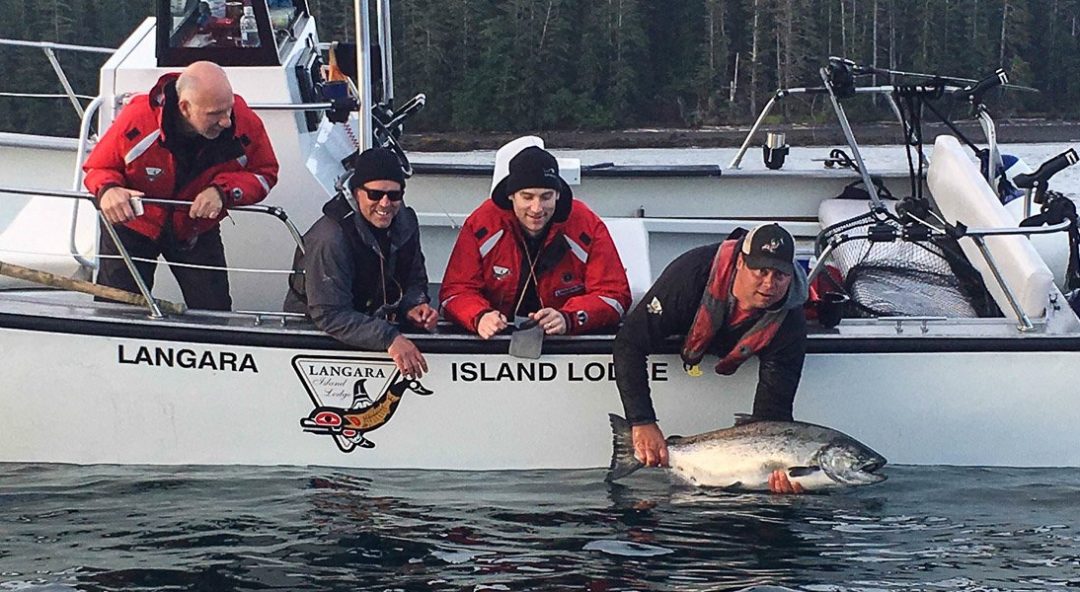 The depths are varying from tide to tide, with one producing shallow and closer to shore and another way down at 80 pulls offshore.

Prospects for Chinook have also improved around Cohoe Point the last couple of days, and mainly offshore here, too.

A great start to the day at Langara fishing Lodge

The wind has been a pretty steady westerly this week, so most of the action has been taking place east of the island.

A few tides have smoothed out the west side enough for us to sneak in some productive bottom fishing sessions. Lots of 20-30 pound Halibut were brought in from out there, and a few much larger ones hauled up and released.

The hot depth was 300-310 feet of water, with herring or salmon working equally well for enticement.

But even when the west side has been inaccessible we’re still finding lots of smaller Halibut offshore of Andrews and Cohoe Points — either targeting the bottom or while fishing deep for salmon. 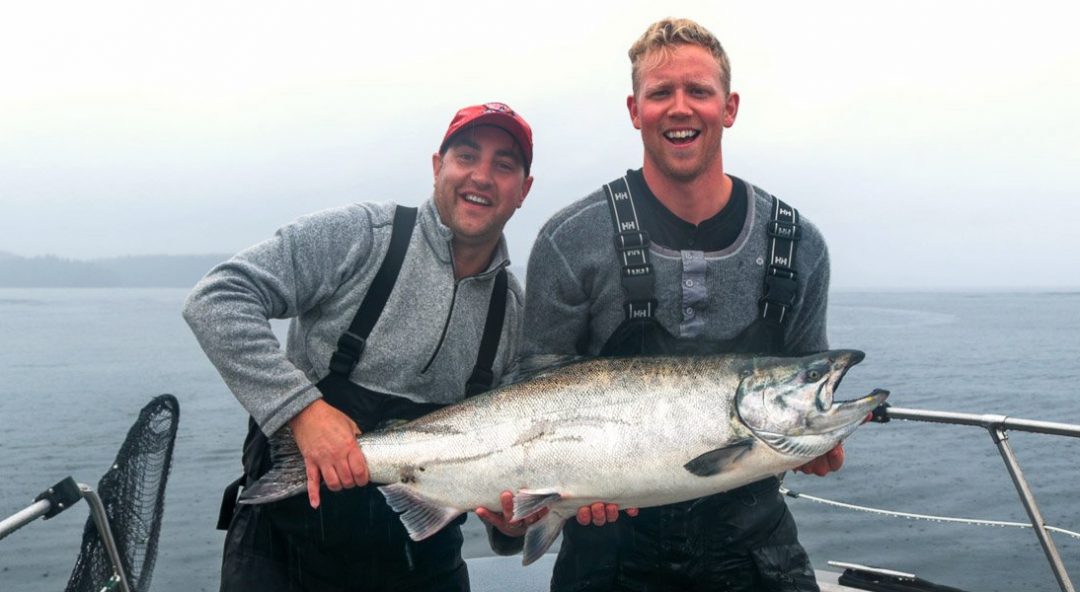 We’ve seen signs of a lot of shark activity around the island this week. If you have a fish that’s pulling line like it’s too good to be true, it’s probably a salmon shark — and you’re likely about to lose your leader! They’ll sometimes stay on long enough to get a glimpse of them, but not often.

So nice to see that all of the fish were so fat and healthy! #salmonfishing #gofishbc #coho #chinooksalmon

Mother nature provided us with another incredible sight this week, as some Transient Killer whales hunted down a couple of larger sea lions. 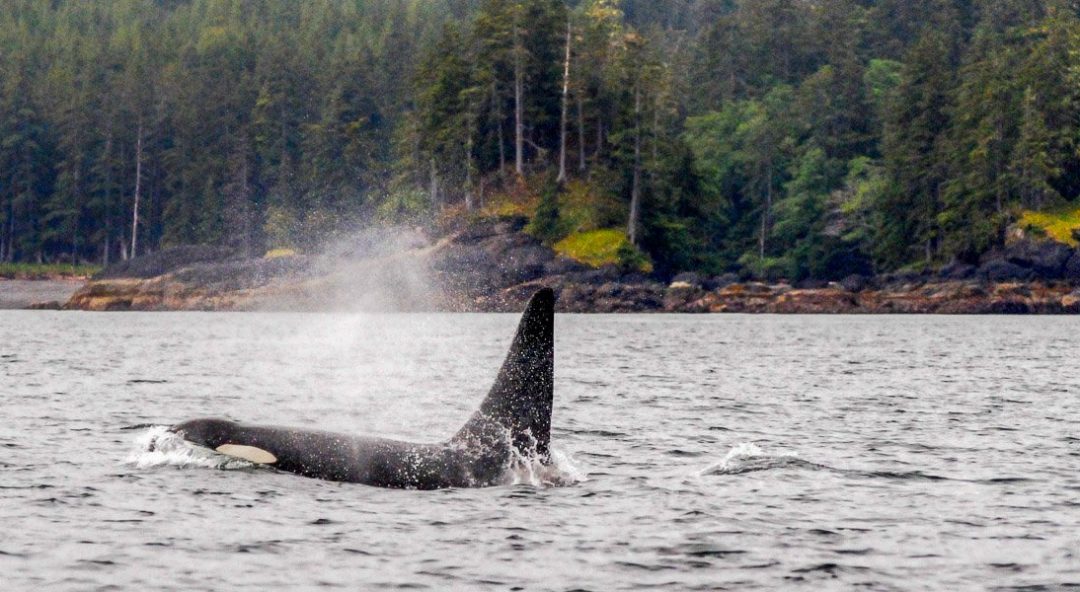 The odd Humpback whale has been sighted cruising around the island this week, but their numbers have definitely been a bit low the past couple of weeks. They seem to be hanging out away from the island — you can often see plumes far offshore along the horizon, especially early or late in the day.