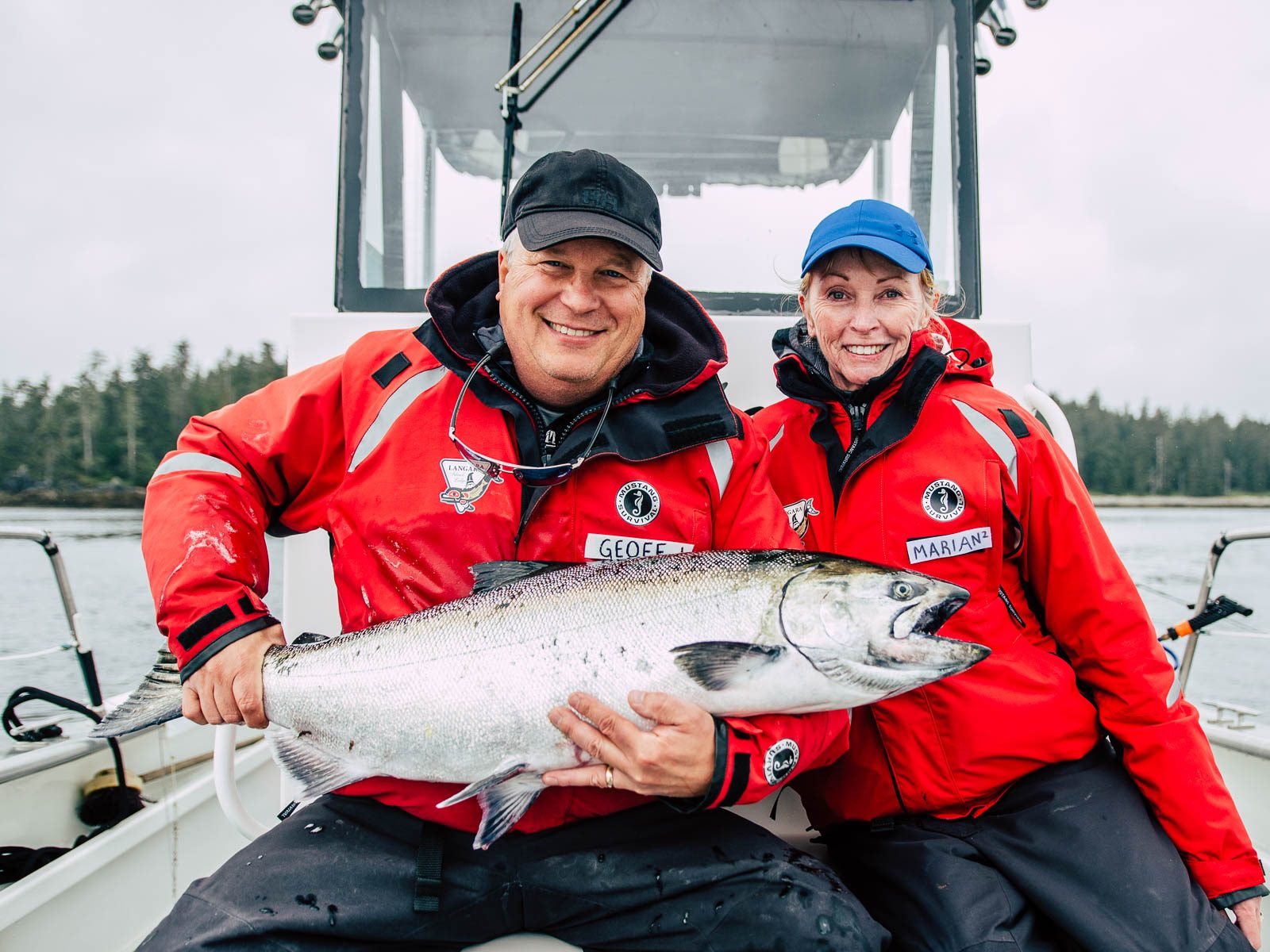 Our most productive week of the season began and is ending with pleasant conditions and plentiful bites all around the island. 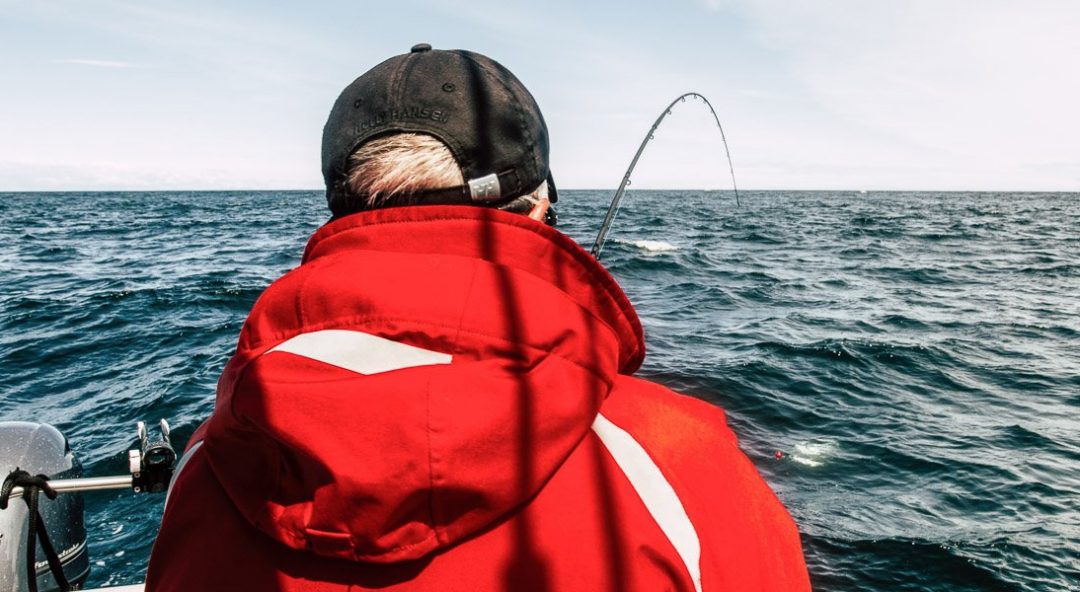 The top of Langara continues to be home to the most consistent action this season.

Our fleet was feasting on flurries of fish flowing through these waters earlier in the week, with the best action of the season taking place here late Sunday and through Monday.

The whole stretch from NW of the Lighthouse over to McPherson Point was serving up strong numbers of both Chinook and Coho salmon.

Near-perfect conditions were a big help, and the bites were coming easy, both shallow and deep, with lots of busy boats. 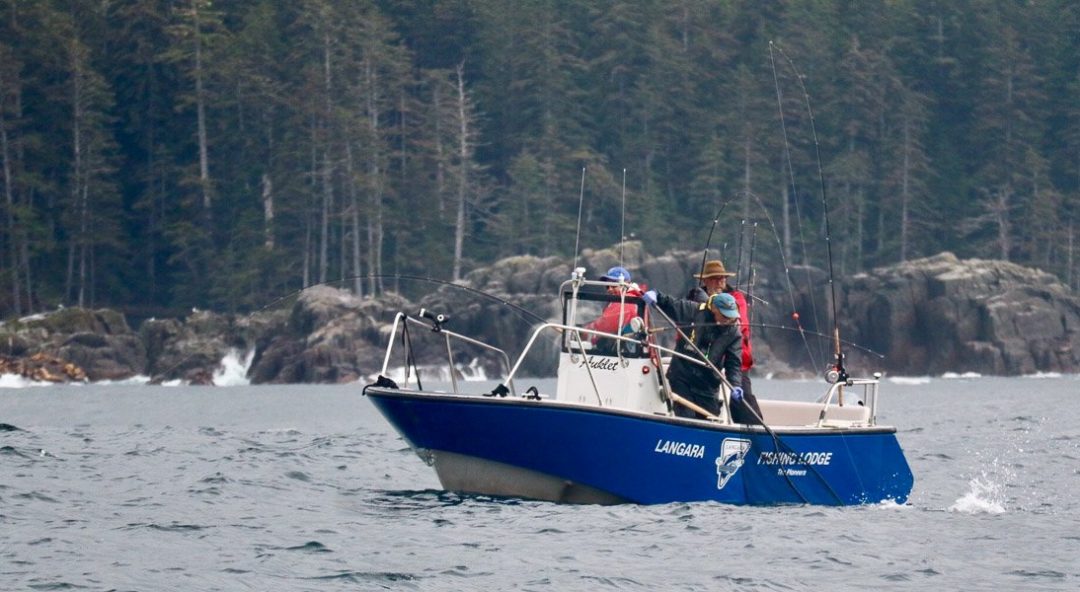 A strong mid-week westerly wind pushed us out of this area for a couple days, but it has calmed and is producing well again, mostly from the late ebb tide into the flood.

Depths here can vary, but generally shallow has been best — both around Langara Rocks and offshore of the Lighthouse. 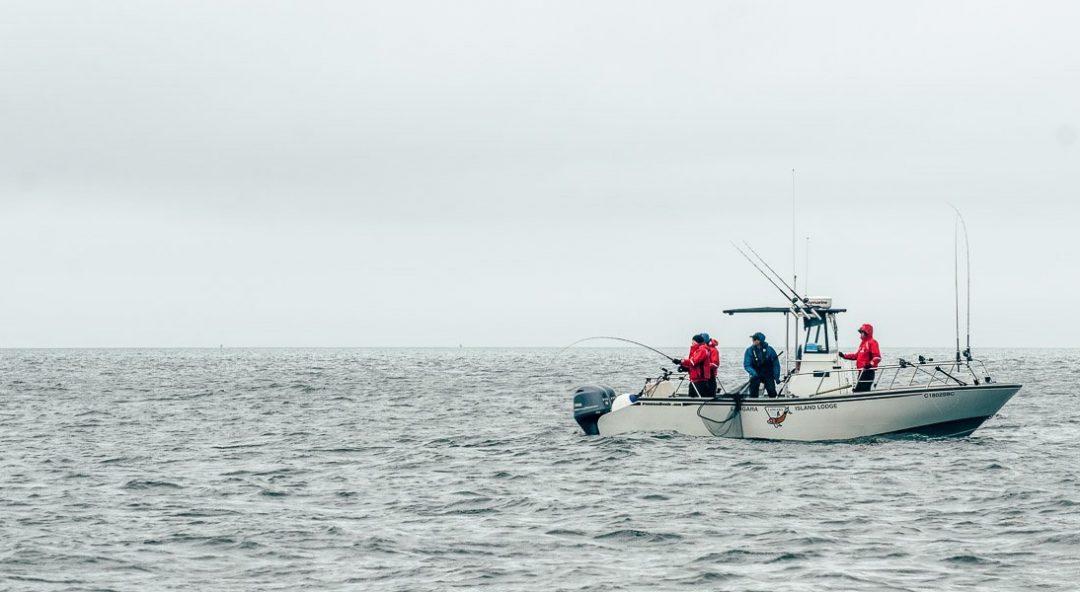 We are fortunate to have a solid amount of herring gathering around the island this season, and the evidence is easy to find in the salmon bellies back at the docks.

The herring are primarily schooling on the top of the Island. They can be seen on the sounder, appearing in large clouds from top to bottom in the water column, and thick enough to black out the screen at times. 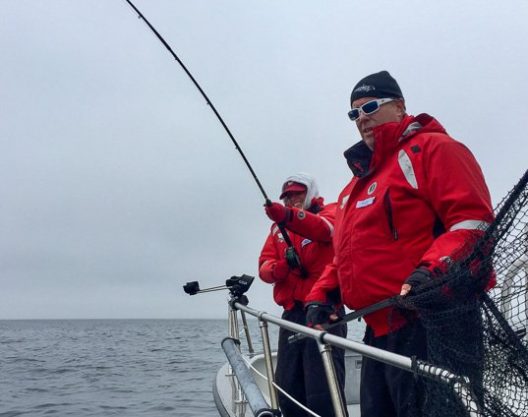 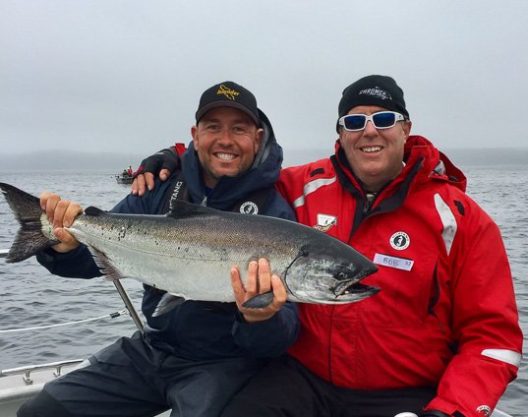 It’s been a strong season so far for Chinook salmon, with healthy numbers and sizes.

This week has featured a number of 30+ pound Chinook, most released, and many more in the high-20s.

Summer here might mean you wear long underwear and rain gear everyday but nothing beats days like this.

Although it has generally been yielding fewer fish, the Graham Island shoreline continues to hold more of these larger Chinook, including this beauty caught-and-released off Seath Point… 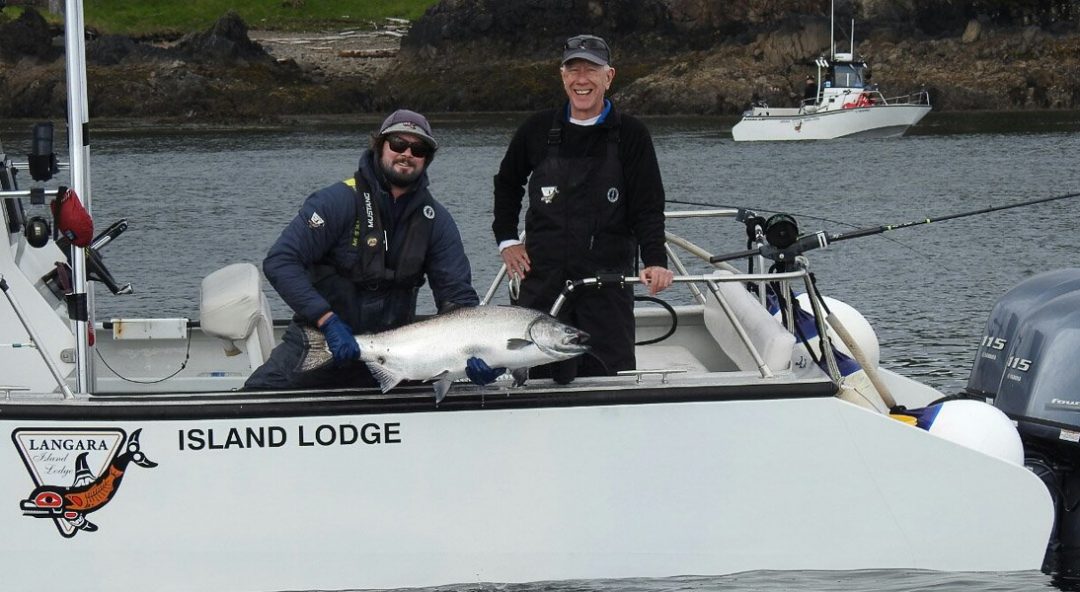 The top of the island has been the go-to spot this season, but any time a westerly wind settles in much of the fleet tends to migrate down to Graham Island’s more sheltered spots.

When that happened mid-week, Pillar Bay welcomed a bunch of boats and we saw some nice fish taken off Seath, Boulder and Gunia Points. 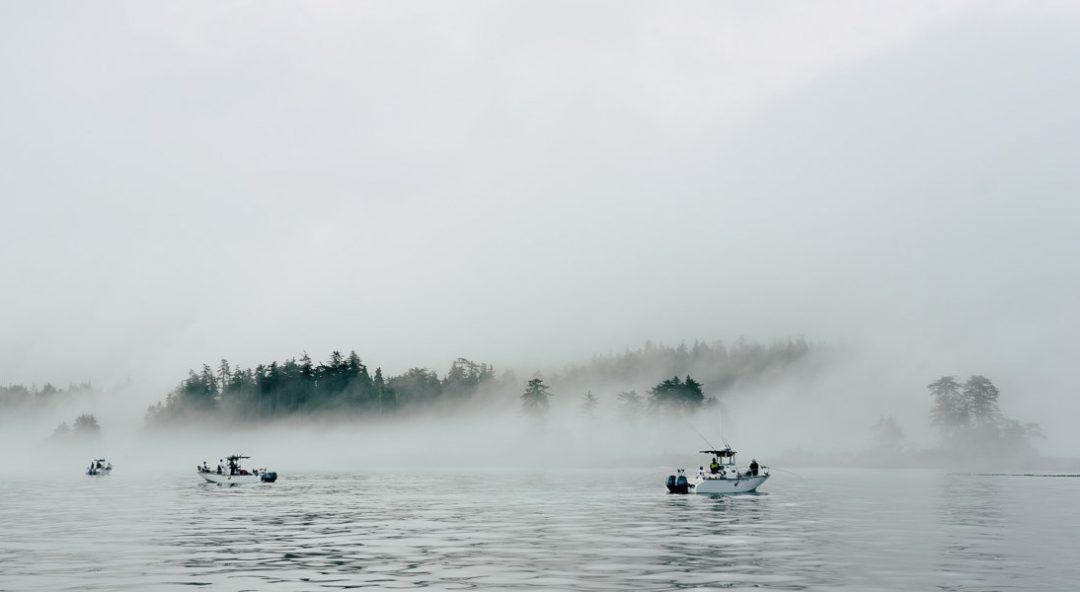 Needlefish is the prevalent bait here, and it seems to be gathering more in the shallower water, as many of the salmon are being scraped from the kelp beds close to shore.

A lone Humpback whale has been cruising back and forth, doing laps around Boulder Point and likely feeding on those same needlefish.

Elsewhere along Graham Island, Chanal Reef has also had its moments this week, kicking out several nice Chinook, but Bruin Bay in between hasn’t produce much action for some reason. 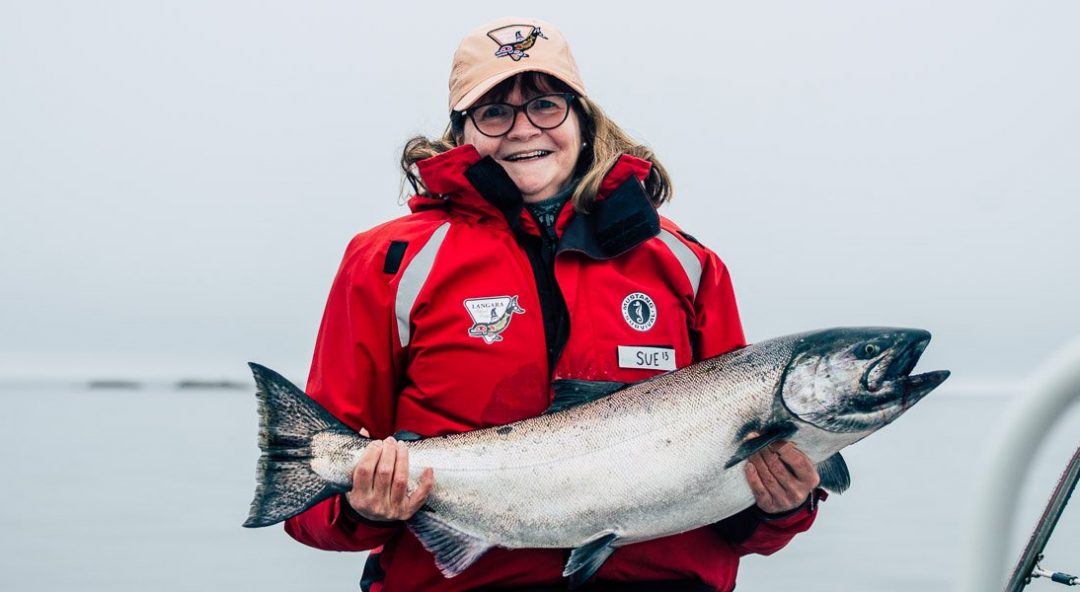 Those shallow waters along Graham have even contributed to a bountiful week on the bottom fishing side of the ledger.

Off Seath, Boulder and Chanal, a few anglers each found halibut in the 35-45 pound range on salmon gear at just 10-20 pulls!

Several days of ideal conditions this week also resulted in some very nice halibut and lingcod being brought in from the west side. 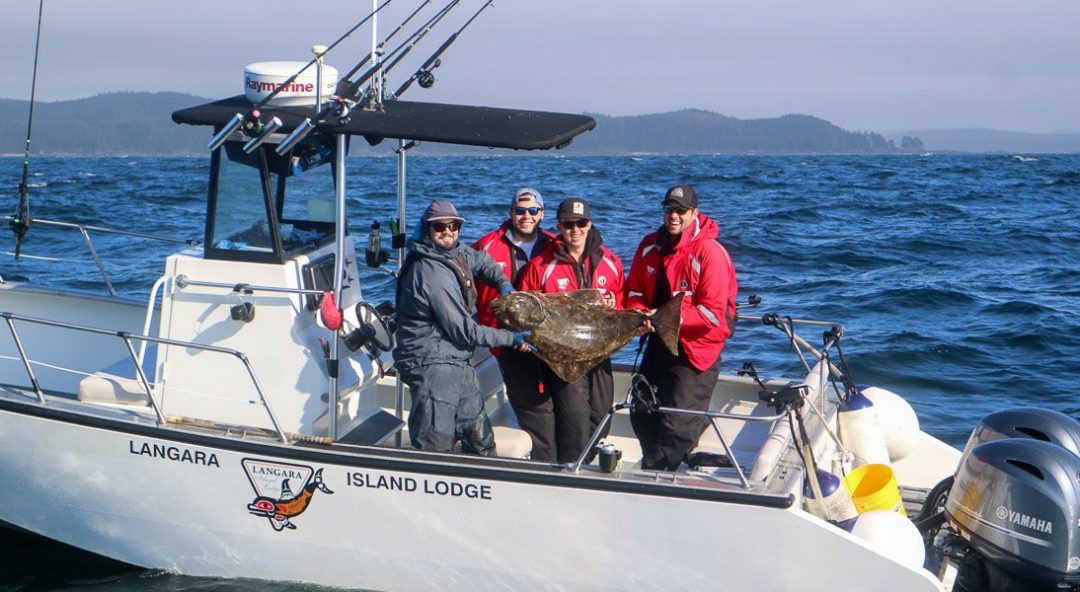 Coho salmon are really starting to impress. They are now swimming by in more consistent waves and tipping the scales at great weights for this time of the season — we’ve seen several over 10-pounds, including a season-best 12.5-pounder last weekend.

They seem to be in better numbers off shore a bit, from Andrews Point around to the Lighthouse on any given day. 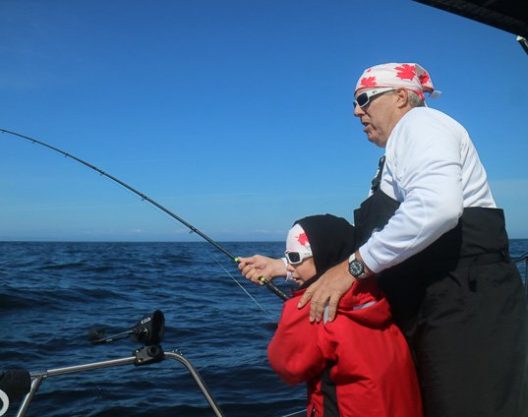 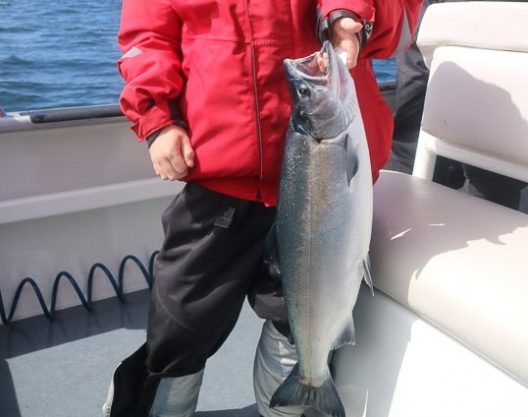 Humpback whales are also plentiful around the island right now, with individuals or groups sighted both offshore and closer to the fishing grounds.

Langara Island is certainly thriving this season, with bountiful wildlife everywhere you look — hope to see you up here soon! 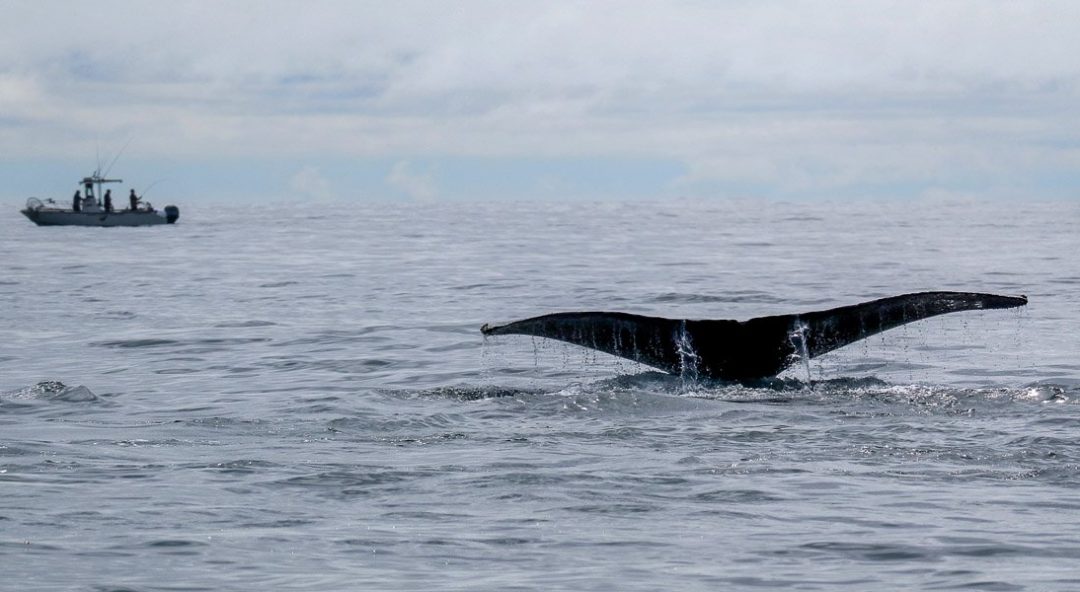